Writers tend to have great imaginations. But even writers can get stuck for ideas. Does that ever happen to you? If you're searching for something - anything! - to write about, here are some ideas (also called prompts) to get those creative juices flowing.
1. Ponder your own questions.
Ever wonder something off-the-wall? Like… Why are dogs always napping? It's not like they have to hunt for their food, go to school or really do anything at all! Now, take a question like that and answer it however you like. Could make a pretty good story.
2. Stop reading that book!
If you're halfway through a book and wondering how it'll end, this is your chance to decide for yourself. The characters and plot are already in place. All you have to do is write your own ending.
3. Read newspaper headlines.
There are lots of interesting stories in the paper, but you don't have to read them to get writing. Just scan the headlines, then write your own story to follow.
Happy writing!
Posted by Heather E. Schwartz at 6:23 AM 1 comment:

Be a Better Writer: Read it Out Loud!

Writers always want to make their work better. Some say writing is really about rewriting. The problem is, it’s not always easy to know how to rewrite a piece in a way that will improve it.
Some writers set their work aside for a while after they’ve written the last sentence of a draft. Others start rewriting immediately. But either way, the question remains: How do you know what to do to make it better?
One way you can figure it out is by reading your piece aloud.
Reading what you’ve written out loud gives you a chance to hear where your words and sentences flow—and where things get clunky and awkward. (And yes, there are always spots where writing gets clunky and awkward. At least in the first few drafts!)  Reading work aloud gets your words out of your head, where everything you want to say is clear. When you listen to what you’ve written, you can pretend you’re a reader. You can hear if something doesn’t make sense or if a point you’re making on the page needs more clarification.
Another benefit to reading your work out loud: It’s a great proofreading method. Spellcheck might not pick up on the fact that you’ve left out a word in a sentence or misspelled a word that has several different spellings (and meanings).  When you read aloud, these types of errors are much easier to spot than when you simply reread silently to yourself.
So the next time you finish a draft of a story, essay, or poem, find a private spot where you can read the work aloud to yourself—no other audience members required. The process will give you plenty of clues about what you should do next to improve your work.
Posted by Heather E. Schwartz at 6:11 AM No comments:

Next Up: Improving Your Work

When you're writing for yourself - and not your teachers - you don't get grades. You don't get comments scribbled in red ink all over the page (thank goodness!). But without those clues, how can you know what will improve your work??

Next up: a writers' trick you can use to figure it out yourself. No teachers required!
Posted by Heather E. Schwartz at 7:17 AM No comments:

Shows like "Sesame Street," "Little Einsteins" and "Super Why!" may seem a little babyish after a while. But if you still love watching them, there could be a very grown-up reason: They're great shows! And the reason behind that? Talented writers.
You could grow up to be a writer for children's television. Jennifer Hamburg did. (She's also author of the picture book A Moose That Says Moo and creator of Dramatic Fanatic mystery theater parties for kids). Here's what she has to say about her career. Learn more at www.jenniferhamburg.com. 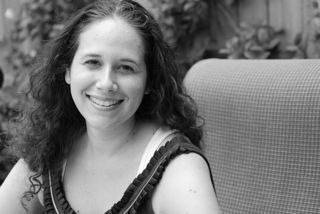 How did you get your first job writing for children's television?
I went to grad school to study Educational Psychology. After I graduated, I was hired to do research for a "Blue's Clues" spin-off called "Blue's Room." They knew I was interested in writing (because I kept reminding them!). After that job was finished, they asked me to stay on as an assistant writer.
What did you like most about the job?
I really got to see the ins and outs of how a TV script was written. Every show is different. For some the writers work together. They brainstorm ideas and each leave with specific writing assignments. Other times writers get a treatment and a deadline and work on their own.
How long does it take to write a script?
Two weeks is typical for writing a script and maybe one week for a revision.  Sometimes I’m asked how long I need, and other times I’m given the date and time to hand it in.
What's the biggest challenge writing for children's television?
I write for many different shows now. Each show has a specific tone, feel, style of humor, etc. My job as a writer is to take my writer “personality” and fit it into the particular show I’m writing for. It’s harder than it sounds!
Also, lots of preschool shows have specific lesson plans for each episode. I need to include learning moments in the story, which can be tricky.
What's your favorite part of writing for children's television?
I like diving into a new script and going over and over it until it sounds just right. I think of rewriting as a creative exercise. I think of it as a puzzle - a very, creative, fun puzzle! I'm inspired by the shows I write for, and each script makes me a better writer. Most of all, I love knowing that my work is making kids smile.
Posted by Heather E. Schwartz at 5:03 PM 2 comments:

Remember Elmo? Little Einsteins? Caillou? Up next, an interview with children's television writer Jennifer Hamburg! Here are some new words that appear in the article.

deadline: the date an assignment is due
script: the written form of a show
spin-off: a show created from a similar show
treatment: a summary of an episode
Posted by Heather E. Schwartz at 8:33 AM No comments:

"Write what you know."

Heard it before? Most students get that message over and over again. But there's a lot of satisfaction in writing what you don't know. In fact, that's the basic idea behind many paying writing gigs. Newspaper reporters, for example, don't know everything about everything before they get started. They ask questions, get answers, and in the process, gather material they can use to write their articles.
When you open your mind to writing about subjects you're not familiar with, you can write about anything. There are no limits, and that's exciting. There is, however, one major hurdle to overcome. That would be your ignorance about the subject matter you plan to tackle. How, for example, can you write a story about a girl living on a horse farm if you've lived your whole life in the city or suburbs?
The answer is simple: research.
Once you know what you want to write about, no matter how little you know about it, you can find out more. There are many ways to approach your research. In the case of the horse farm story, you could actually visit a horse farm to get some details. You could also interview a horse owner, read about horses and their care, attend horse shows, watch youtube videos of equestrian events, and the list goes on wherever your imagination might take you.
It doesn't matter if you start writing the day you start researching or when you decide you're done. (Some writers get really caught up in research - it's fun to learn about something that interests you!) The point is, once you start, you'll know more about your subject than you did the day before. That knowledge allows you to write about it.
So in the end, maybe once you do some research, you're writing what you know after all!
Got your own ideas about how to research writing topics? Please share!
Posted by Heather E. Schwartz at 5:29 AM No comments:

My Blog is Now For Kids!

The truth about me and blogging - I just can't get totally into it! I love writing. Blogging seems like a good way to keep at it. But for some reason, it doesn't really keep me hooked.

Writing articles, however... that's another story.

I like writing articles, even if there's a good possibility they'll never be published. Lately, I've been writing articles about writing, but aimed toward kids. When I look up info about writing (craft, publishing, etc), it always seems to be meant for adults. The info about writing meant for kids almost always consists of a specific opportunity to get published. Which is fine, but what if a kid wants to know more about how to become a better writer? Or how the big-house publishing industry works? Or about different careers in writing and publishing?

Well, these questions have led me to retool my blog. It is now going to offer the answers to those questions - for kids! I'd love to have kids involved in shaping my blog, too. So if you know any kids who love to write and have some questions, please send them my way!
Posted by Heather E. Schwartz at 4:46 AM 2 comments:

Write in the Middle

Check out the start of my webzine for young writers Write in the Middle! There's still time to help me win a grant to build it. Vote here!

Read my guest post on Smack Dab in the Middle!